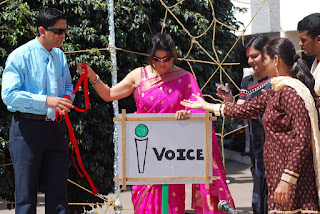 Freedom of speech, the predominant fundamental right and the precondition to development and democracy,

today needs a vent. I-Voice, a speaker’s stand is a concept to promote this idea.

I-Voice was inaugurated at the auspicious hands of Chairperson IGI, Ms. Tarita Shankar on 25 February, 2010.

The concept of a speaker’s stand as a platform for free expression was broached by our Chaiperson Tarita Shankar.

Tarita ma’am, addressing the gathering urged the students to avail themselves of the platform provided at Indira’s Universe campus.

She said, “At times we want to express our views but there is no specific platform or a stage for that. I-Voice is created with the idea of providing a platform for everyone who is a part of Indira to freely express their thoughts and opinions on any issue. . Group Director, Mr. Wakalkar also addressed the gathering and asked students to reinvent themselves and that there dwells a superman/woman in everybody.

The program was organized by Indira School of Communication. The students put up a thematic set which appropriately described the event. The audiences were treated to various media such as free speech, music and calligraphy.